PM Commentary by Stacy Goff.
We’ve used the Journalist’s Six W’s for over 25 years now in project kick-off, to help business case analysis. They help to bring all the stakeholders onto the same page. Recently, we were working with a stellar group of Managers in the Middle, those who manage project teams. Wee came up with a new (for us) use of the Six W’s.

Background on the Six W’s

Originally established as part of our PM methodologies in the mid-80’s, we use the Six W’s to perform opportunity analysis. We’ve used our selection of the W’s, in the right sequence, with many, many groups over the years. Those include classes and coaching for project managers, customers, managers and team leads. The W’s we use, in the only correct sequence for project delegation, are: What, Why, Who, Where, When, and How. We admit to playing loose with the w’s. If people point out that How is an H, not a W. We assert that it has its W at the end because How is the last W to understand.

Some of the learning dialogue that accompanies the W’s is that there may be multiple Whens:

We assert that the competent team can always show how they could beat the must (deliver faster) by 25%. In fact, if they cannot perform this simple analysis, we doubt if they understand enough about the project to manage it successfully: They are not yet competent. This is the type of learning, that causes Executives who see it to ask: “This is powerful stuff! Do our people know how to do this?” The answer is usually something like, yes, they do this in each project they begin. But, you have (for example) six layers of managers between your teams and you, And part of their job is to filter out the information they think you don’t need. But we may be getting ahead of ourselves. We’ll come back to that thread below.

In the early 90’s I was working with Kathy, an HR Director at a major insurance company, on a two-day Executive session. Our audience was the Executive Sponsors and the Project Managers of the company’s largest, most important projects. We had worked together at that point for over six years, and she knew my curriculum well. She insisted that we expose the executives to the Six W’s. I agreed; they always get great insights from them. And then she did a magnificent leap of common-sense application: The Six W’s were also the most-appropriate framework for an effective Project Communication Plan. We sketched out the way it would work, and both she and I have used it ever since.

In 2007-8, I co-wrote, with Florian Dorrenberg, the Communication chapter for IPMA-Germany’s “Big Book.” This 35 page chapter (50 pages after translation to German) covers most of the current topics related to project communication. The full bookset is four volumes, and is the foundation for all advanced PM certification in Germany. Kathy’s use of the Six W’s, as the framework for a project communication plan, are part of that communication chapter. This is now required learning for all IPMA-certified, competence-assessed project and program managers in Germany. The Six W’s have traveled far and wide since the mid 1980’s. And, thank you again, Kathy, for applying them for another useful purpose!

In this recent class (mentioned in the introduction paragraph), we were discussing the role of Managers in the Middle. These are the people who are the enablers of two way communication in successful companies and government agencies. They can also be the blockages in less-successful ones—the cholesterol in project communication, as it were. And, we discussed managing upward, managing downward, and the nature of the information they must convey. Must, if they are to be effective, and audience-focused, rather than ineffective. It was mid-afternoon, and the sugar-rush from lunch was wearing off—the class was lethargic. So I came up with an exercise. 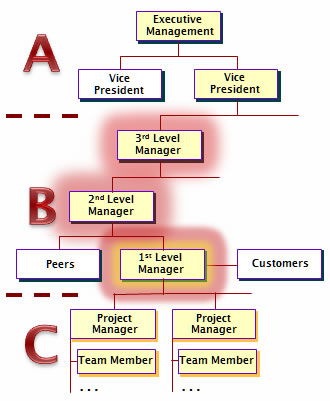 I wrote the Six W’s in random sequence on a flipchart: How, Who, When, Why, Where, and What. And I showed a simple org chart. Then I asked the teams to answer these questions:

We’ll leave it to you to decide what your answers are to the above questions. In our class, it quickly became very clear that Managers in the Middle must understand all the Six W’s. And they must use the right W’s with the right people at the right time, Those who do so add value to every project in their domain. And those who do not, do not.

We first encountered this role-specific responsibility for the W’s many years ago, but didn’t recognize the opportunity. We were working with a Health Insurance company, that had a great strategic plan. But, they were frustrated that they could not implement anything in the plan. It turned out that none of the Managers in the Middle were strategic thinkers. They did not understand the same W’s the Executives were excited about. We solved their problem by identifying people in their organization who could master and communicate all the W’s. Those three levels were Executive, Mid-Management and Project Teams. Essentially, we established cross-level translators.

Later, in one of our blog posts, we posed the question, Is Project Management Strategic, we responded, of course it is: But are You? Many very competent PMs are not strategic–because they focus on the W’s that tier C is responsible for. But they find people on their team, or above them, who can communicate what tiers A and B need to know.

The Bottom Line On the Six W’s

The Journalist’s Six W’s are a great project tool. Like any tool, they benefit from situationally considered use. Too many people, especially when under stress, tend to communicate (if they do at all) what they would need to hear. Effective project managers, team members, managers and executives communicate what is expected from their role. And, they communicate what their audience needs to hear. Less-effective ones merely communicate their favorite W’s, and ignore the rest. And for those who aren’t sure you have the answers to the questions above, I’ll tell you this: Tier C should not be hearing mostly When and How from tier B.